A syncretic overview on how driver management works in K2000 3.4

After learning the most of how K1000 works I started to dig in the K2000.
It is a really nice and powerful product, very flexible and expandable but one thing over the other was surrounded by mystery (at least that was my feeling): the driver management!

I started to read articles here and there, asking to friends and colleagues, watching various videos and I found out that there are many ‘’doctrines’’ and pieces of information spread all over the places that you need to know to unveil how the driver management mechanism is working.

I thought to write a “syncretic” document that explains what I understood about the driver management in the K2000 3.4.

Under this folder there is a folder for every OS supported and two folders for KBE, one for the KBE 32 bit and another for the KBE 64 bit. 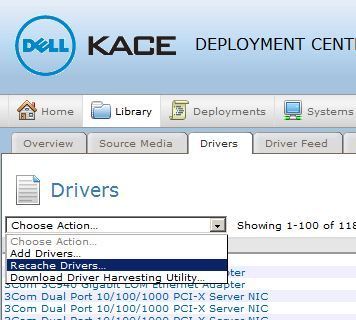 NOTE: when you use Media Manager do not name the KBE as a name of a KBE that already exists: the Media Manager is not able to overwrite an existing KBE but it will tell you this, kindly, at the end of the KBE rebuild process.

Under the OS folders you need to add, as in the KBE folders, the bare minimum drivers that the scripted installation of Windows needs to run effectively, so again: network and storage drivers.

Under this folder  we need to add all the drivers that our machine will need after the scripted install is finished (so for its ‘’normal life’’) : storage, network, audio, video etc etc…

If your machine is a Dell machine the Driver Feed functionality does most of the job for you: under Library -> Driver Feed you can search for the device you need to image the OS to and download the driver packages: job done!

If your machine is not a Dell machine or you need to add additional driver you will need to add them under this directory but how??

The folder structure under the DRIVERS_POSTINSTALL is  the following:

Simply execute on the system this VBscript program: 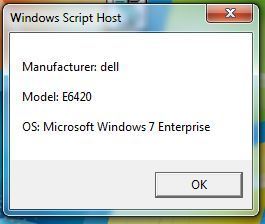 Under this folder I suggest to create a folder for each driver and put under that folder all the files needed. Once again: if the driver is shipped as a monolithic ZIP, EXE or MSI you need to extract the files and put there under the folder.

If you added drivers only to this folder without touching the DRIVERS folder you do not need to rechache the drivers.

If you only use scripted install and you have followed the entire article so far you are done! No other steps, other than test your solution, are needed. Big success

But if you use imaging you need to use the famous Driver Feed Workaround.

If you do not have it in your Postinstallation actions you need to read this article where there are links to download the utility:

In a nutshell after downloading the Driver Feed Workaround and unzipping it you will find some files: 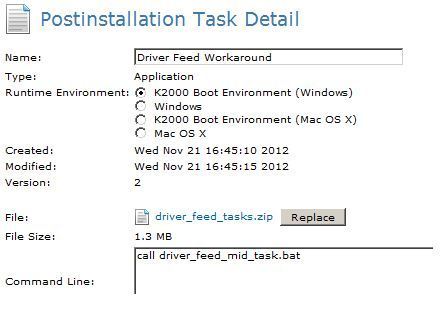 With the install_drivers.exe you need to create a Postinstallation task like this one: 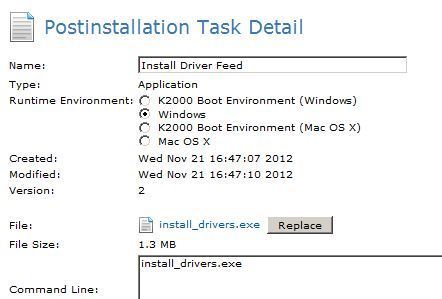 Once you have defined these two tasks you will need to use both of them if your image OS is Windows XP.

You will need to use only the mid-level task (Driver Feed Workaround that runs under the K2000 boot environment) for all the operative systems but the “Install Driver Feed” (executed in Windows that calls install_driver.exe) only for Windows XP systems.

Instead of using the driver_feed_tasks.zip file to create the mid postinstallation task you can directly use this script: \\<your_k2000>\peinst\hta\copy_drivers.vbs 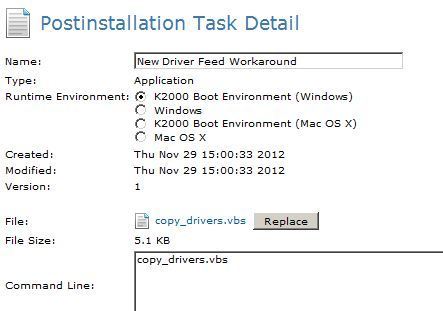 Where to use these tasks that now I created.

The two task you created are needed only when you deploy and image and not for scripted installations.

To deploy a Windows XP image you use them in this way: 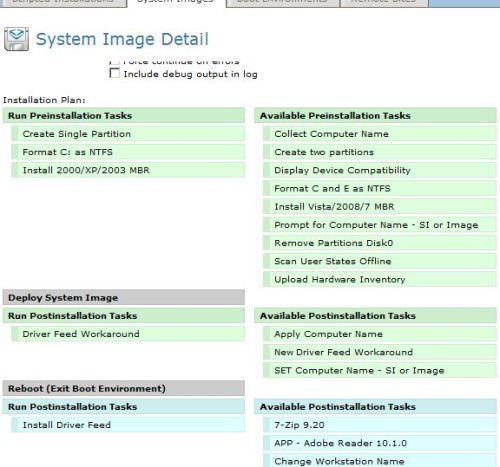 For Windows Vista and Windows 7 you will not need the “Install Driver Feed” job.