This was a panel discussion on the future of the desktop at Interop 2012. For the most part, everyone was stuck on the term "desktop" and agreed there really won't be a desktop as we know it. Below are my notes about what each of the panelists had to say on the topic... 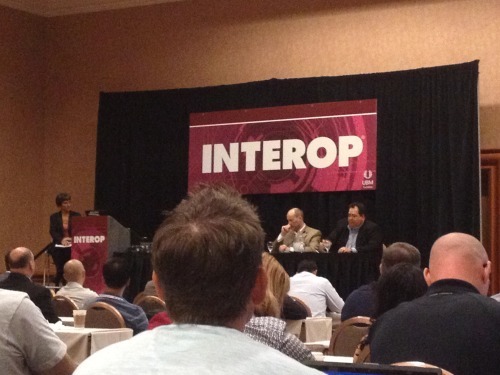 John of Nemertes Research says SaaS is a clear trend—outsourcing services to deliver value to users as opposed to setting up such services in-house. Eventually sees us reaching a point where the desktop is a browser used to consume cloud services. 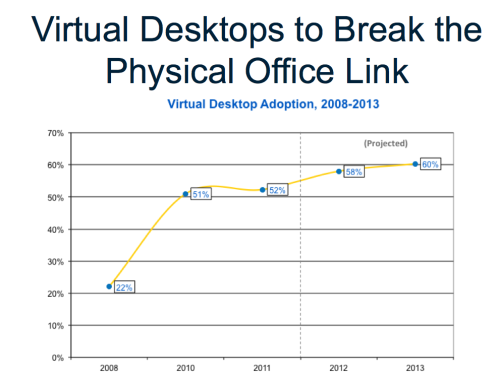 John posted the above chart on virtual desktop adoption which I found very suprising. I wonder the source and the sample size for this as I've typically heard people say it was something they are investigating, not using (due to the complexity and expense of VDI).

Phil from VMWare says VDI is a stepping-stone to the future, not the future. The future is a new OS that learned from the lessons of the past—something taking a new lightweight, secure approach like Chrome.  HTML5 lets you deliver to any device and as such is a critical technology to get to the next generation.

Glenn of Google focused on the move from a single OS/Device/owner to many different platforms, operating systems and may not be owned by the business.  Also stressed the importance of HTML5 as pushing us to the future desktop.  Also said there is no desktop of the future, the device and OS will not matter—if anything the browser is the desktop of the future.

Roberto of Cisco naturally introduced the concept of voice and video to the workspace of the future. Of the panelists, Roberto definitely had the best slides and was much more specific about the technological challenges around the need for more maturity in the VDI space but stressed the limitations of VDI are being addressed on a regular basis. 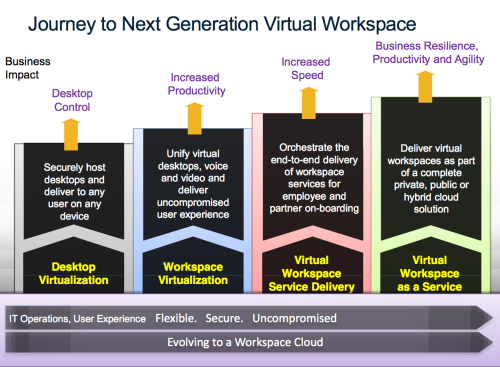 Above was an insightful slide describing some of the things that clearly need to happen for us to get to a next generation virtual workspace.