As a conference catering largely to SCCM users, it was not much of a surprise to see that this session presented by Bryan Keller, Russ Wilson (Lead Program Managers) was the most packed breakout session I’ve seen in quite some time. Every seat was taken (in a large room and well before start time) and many were standing on the sides and back to take in the news. 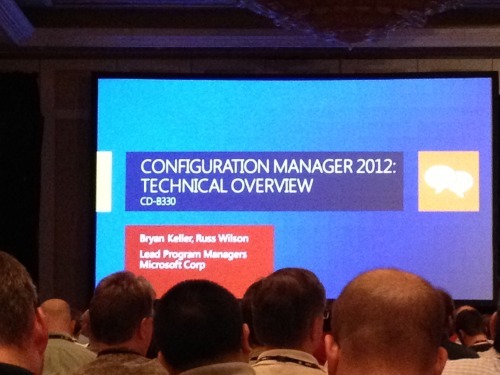 Because the details of many items covered are to be provided in other sessions this presentation was a bit jumbled where some topics got a lot of time and others (though interesting) were covered very briefly. There wasn’t much by way of a clean list of features discussed either so my notes here are less than ideal but I decided best to share anyway as a tidbit or two may still prove valuable so someone…

On the topic of consolidating one’s infrastructure for primary sites, there used to be several reasons to break off remote sites as their own primary site, which are no longer necessary thanks to new improvements and enhancements. Paramount is that you no longer need to have a primary site set up just to support decentralized administration. Role based administration supports what resources, actions and objects any given user will have access to. Now there is but a single distribution point, and no branch DPs are needed. It supports multicast, bandwidth throttling and scheduling of content to remote locations.  You can also pre-stage content by physically moving media to the remote site.

A big change was the introduction of a new user interface. While many cringe at leaving a familiar interface, it was clear from the crowds reaction that nobody will miss the old MMC admin console. Now there is a common look and feel across System Center products (leveraging the familiar Outlook style UI).

They discussed a job named CCMEval that runs once per day, performs a WMI repository consistency check (writes to and reads back from WMI to see if it is working). If that check fails, the client can be automatically reinstalled as a corrective measure.

There has been a move to a user centric approach for software deployment. Now, which users are using which devices and which are their primary systems is leveraged to be smart about when to install software onto the user’s computer. With the ability to distinguish the computer to which a user is logging on as the user’s primary computer or not, deployment logic can be introduced to say, “These applications can go to users on their primary device, these other applications can go to any device they use.”  Understanding the relationship between the user and the devices is key to supporting this functionality. Some automated logic can be used to determine what is primary, or the admin can specify. In a conversation later, I learned that there is also an ability to let the user choose what is their primary themselves and that it is possible to specify more than one primary device.  The notion of people-centric deployment also comes into play with OS deployment. Leveraging the knowledge of who’s computer is being built, the system can have the user’s software pre-deployed before the user logs in.

Clearly the regular use of “device” instead of “computer” makes you think Mobile Device Management (MDM) but so far not much has been shared on that front.  This presentation stated support for Windows Mobile 5 and 6 and Nokia Symbian “Belle” but that this is a starting point and they are working to expand this support. Word in the halls is that support for mobile devices will extend to any that utilize ActiveSync (and that this is basic, not deep, management as a result).

Application dependencies can now be specified so logic can prevent attempts at installation until all listed dependencies have been successfully installed. Application supersedence is also possible so you can identify which applications replace others.

The first steps into VDI were explained as being additional inventory information for virtual machines. Such information can be used as conditions for deployment. The uniqueness of a client is now maintained through shutdown and startup of the virtual machine to avoid generation of obsolete records.

A web based software catalog is available to allow users to browse, search, install, and request software deployments.

Remote Control has been updated, adding granular client settings per collection, the ability to lock the remote keyboard and mouse, create firewall exception rules. It now supports sending of CTRL-ALT-DEL (this got laughs) and copy and paste between the local computer and remote system (this got claps).

Currently undocumented, in a final demo, they added sms:debugmode on the shortcut to the admin console (no slashes) to reveal a new tools menu item: Tools > Namespaces offers a tool geared to replace using WBEMTest by offering the ability to browse the properties methods and instances of WMI (read only).  Some additional information also gets added to when browsing the admin console and many raised their hands to say the additional information would be helpful to them.