As far as malware, there are two types of enterprises. Those who have realized they have been hacked and those who don't realize they have been hacked. Microsoft has identified that the times they are a-changing when it comes to security vulnerabilities and countermeasures.

Modern attack examples:
Stuxnet! Trusted UEFI would not work to prevent this attack since it's all based on signature spoofing.

Windows 8.1 will implement a few types of new features to address new threats. There will be a very large biometrics push in Windows 8.1 ("we are going all-in with biometrics in 8.1"). Very large push to sell and implement affordable fingerprint readers to replace passwords for nearly instant Windows login without the need to select a profile. API for biometric sign-in will be sprinkled through different aspects of the OS and Microsoft applications.

The other large addition is what is being called "Provable PC Health" (working name, verify clients from the cloud). When something new shows up on a client, it will check in with the cloud and the remote analysis will detect if MS actually provides the new item. Analysis and response, then remediation. Worst case scenario is the problem can't be removed and you must rebuild the computer. Can actually detect malware that steals Microsoft account creds and alert you that the account is compromised.
These features will ship at different times: The remediation process will ship after Win8.1 GA. Everything else will ship in the Win 8.1 box. 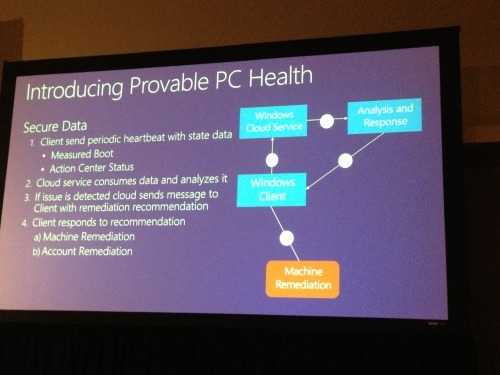