In my previous post about profiling IBM Lotus Notes(LN), I shared with you the procedure of creating a profiled application of  LN bearing in mind the multi-user environment. Today i will share with you, how to troubleshoot your application, if its asking redundantly for entering username, inspite of configuring it, for the very first time.

This issue was brought to my notice when application was repeatedly asking for username. Meaning, now it was no longer prompting for configuring it, was failed to store user name.

The file "user.id" gets created for the first time when we launch LN. It stores the username entered when configuring LN and other relevant information, most of which , is usually unreadable. But, if you open this file in notepad and search for the username that you entered at the time of configuring LN, you will see some of the variables containing the username as its value.

Now its very necessary to bear in mind, never to alter the structure of this file, under any circumstances, else, lotus notes would never function. So if you wish to see the contents of this file, always take a backup of this file and then make the changes(this process is applicable to MSI as well as XenApp applications).

Now coming back to the topic, during the testing phase of LN, the team gave me a weird input. They prompted over and again for entering username, inspite of configuring it. refer the folllowing snapshot for the same. 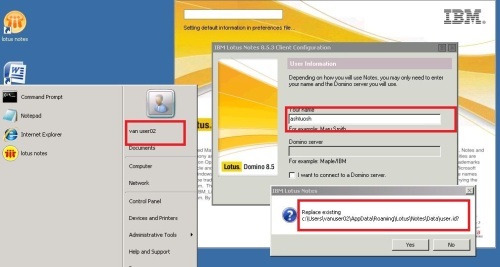 when narrowed down to the root cause of this type of behavior, following two files were found to contain the initial configurationof LN.

user.id under the same location as the above file

With a little permutation and combination, it was concluded that altering notes.ini in any way was not affecting the behavior of LN. Hence user.id was played with. Tempering this file(replacing the username values with a different set), altogether changed the behavior of LN. LN was now prompting to locate user.id file. When the same file was passed to it, it presented us an error that the user.id file is not valid(it is, therefore, i mentioned, not to alter this file in any way).

Now i have a question for the readers.What could possibly be the cause of the above error(ref the above image)? Think!!! The file is still present in its current location, without its structure being altered. Think!!

All right, now without wasting your time, lets come directly to the issue. The problem is the file itself. Shocker!!!!

Let me explain this over again. When lotus notes is first launched, it asks for configuration, these configs gets stored in user.id file. Now for an instance, if there is already a file in this same location with different set of settings in it, which have come because of local install(ours being a virtualized application). So as long as this file is present under this location, LN will prompt for entering username, inspite of user name already configured before. It would then ask you to replace the user.id file under the mentioned location. This operation would overwrite the older user.id file and alongwith it the settings stored inside it, but when you launch the application again, it wont pop up for entering the username again,but the the setting would be entirely wiped out.