Here is the trick to save network bandwidth and K2000 diskspace.  Store the Wim's on Windows servers, Wim files are not restricted to K2000 file system.

I had the server crew create storage space on all the sites and I store my Wims at each site.  They created a share on the main storage server at each site named images$ and I have a K2000 domain user that has rights to these shares.  I created a subdirectory called imagestore in each share (required).

When I need to capture a sysprepped image I choose the custom boot to map the server I want it to go to. I discuss making the custom capture KBE’s in this blog:

When staff deploys an image, they pxe boot to the K2000, the machine gets it deployment orders from the k2000 and starts.  I remap the T drive as a midlevel task prior to the DISM deploy task to the needed storage to access the WIM.

The deployment starts on the K2000 and then it switches over to the storage server to copy the wim portion then switches back to the K2000 for the remainder of it's mid level and post tasks.

All the workload of deploying the image files is placed on the storage servers instead of the K2000.  I have had 120 images deploying from a single K2000 this way and I am still able to capture an image even when they are deploying.

I have had to image over a T1 when the microwave link went down.  Still managed to use the K2000 to do full classrooms by putting the wim file on a local server.

The server crew can easily backup the wims also.

Duplicate the needed templates for your environment.

Replace the “WIM - Apply wim stream C/D/S(UEFI) partitions (template) with the midlevel tasks you are going to create.  The first midlevel task is to remap the WIM source server and the second+ to use DISM to deploy the WIM file(s) with.

I use AutoIT to create my exe’s for the mid level tasks.

The remap AutoIT AU3 is

The DISM deploy AutoIT AU3 is

The P0 and P1 are variables we will use in the deploy task.

Create the au3 files in auto IT then use the complier that comes with it to create the exe’s with.

You choose x86 or x64 during the compile process.

The first group of tasks are for remappings.  Create and compile an exe for each server you want to pull wims from.  Create a task for each remap.

This is my remap EDacad2 task:  Upload the complied exe you created in AutoIT and call it. 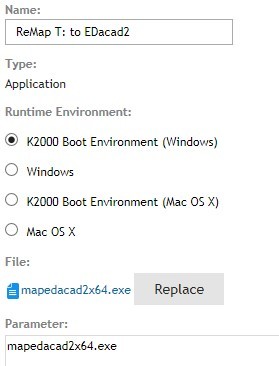 The second group of tasks is for image deployments.  Create a task for every wim to deploy (including the UEFI-S partition for UEFI images)

This is my DISM deploy for acad F15 basic 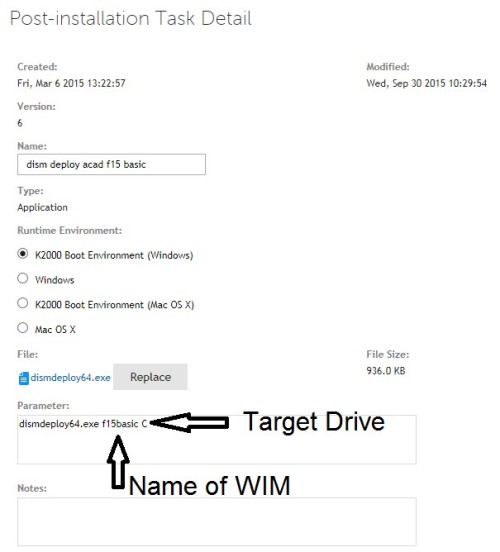 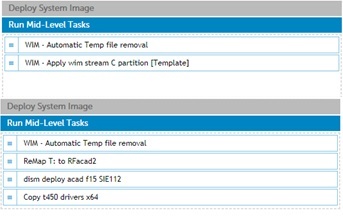