K1000: How do you push Scripts (Invisibly) to your Workstations?

This is how I do it. I am trying to figure out if I am missing something that would make this process less annoying, but here it is:

Now all of the above is set up as such simply so I can run a batch file invisibly, with no possiblity of interaction with the user.
In that batch file, if I want to interact with any of the dependencies, I have to CD to the depedency directory, that is C:\programdata\dell\kace\kbots_cache\packages\kbots\<SCRIPT NUMBER>

This makes the script essentially only usable when run by the kagent, and also that I have to create the kscript before I can figure out what the number is going to be.
If I want to make use of powershell, I have to include the powershell commands via batch like this:

Please log in to answer
Posted by: dugullett 8 years ago

Are you referring to the CMD prompt that pops up for a few seconds? I've had success using http://www.f2ko.de/programs.php?lang=en&pid=b2e I first create a .bat with something like this:

Then using the converter I include my .ps1 file. This will compile the powershell script as an exe and it will deploy silently.

I've also used shell scripts to deploy Powershell. Just upload the .ps1 as a dependency and add this. Make sure to change to script.bat at the bottom. (Still displays the CMD prompt for a couple of seconds) 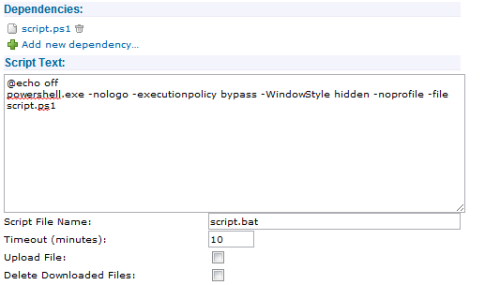 Comments:
Posted by: jknox 8 years ago

Another option would be to attach the batch (outside of the .vbs) as a dependency and use the "Launch a program" feature calling "file.bat" for example.

That should not pop up the batch window.