The only problem is that I need to tell the location of the language pack's setup file. If I do the whole path C:\etc\etc\etc, it works fine, but since I'll be zipping this up and uploading it into KACE or moving around on jump drives I need it to simply be able to find the setup file.

Here is the picture of the prompt that I'm talking about: 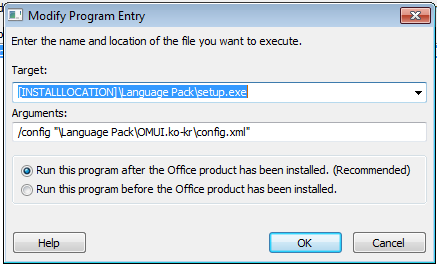 As you can see above I'm currently trying out different paths. I learned that .\ and other attempts along those lines fails. Here's the error it returns:

I was hoping someone out there would know a "Pre-defined Token" that would basically just mean "The folder I'm being launched from." Some examples include [InstallationLocation], [SystemFolder], [WindowsFolder], [CommonFilesFolder], but I haven't been able to get that to cooperate. I'm going to try \\Language Pack and see if I can get that to work. But in the mean time I'd like to hear what the IT guru's here think.

I'm really hoping to get this to work as if I can make this run, I can setup installs for all of our remote offices only using a single install of office 2010 and language packs. Thanks!

Answer Summary:
Rather than using the Office Admin Tool to add the language pack to the .MSP file it was a simple matter of adding the language pack executable to the install.bat file. Using the config files in the OMUI folders for the languages I want.
Please log in to answer
Posted by: piyushnasa 8 years ago

First of all it is not clear that you want to use .bat file for launching this or want to install it through MSI.

If you want to install it through .bat file then use:

If you are using this in MSI then you can use [SOURCEDIR] property.

Remember to add ResolveSource Action in the InstallExecuteSequence table after Cost Initialize.