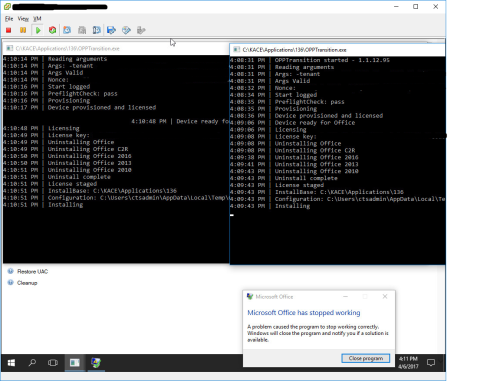 Hello,
I'm trying to put an Office 365 ProPlus deployment into the K2000 to get it to install as part of a scripted install.
I am running version 3.7.12051 of the K2000.
I'm following pieces of this guide as I am doing a Device Based Activation.  This means I must run the command OPPTransition.exe instead of setup.exe to install office:
https://sysadminedu.wordpress.com/2017/01/07/step-by-step-guide-to-deploying-office-365-pro-plus-with-device-based-activation-with-sccm/
I have my setup.exe and I created my config file using this site:
https://officedev.github.io/Office-IT-Pro-Deployment-Scripts/XmlEditor.html
I create the configuration.xml and place it in a folder with the rest of the extracted files.
This is what my configuration.xml looks like:
Configuration
Add OfficeClientEdition="32" Channel="Deferred"
Product ID="O365ProPlusRetail"
Language ID="en-us"/
ExcludeApp ID="Groove"/
ExcludeApp ID="Lync"/
ExcludeApp ID="OneDrive"/
/Product
/Add
Updates Enabled="TRUE" Channel="Deferred"/
Display Level="None" AcceptEULA="TRUE"/
/Configuration
I run setup.exe /download configuration.xml and download the files.
Once I have all the files I zip them up and place them into a K2000 post installation task.
I list my OPPTransition.exe command as the parameter and save the post installation task.
When the task runs, it opens TWO command prompts both running the OPPTransition.exe command even though I only told it to run once.  The commands interfere with one another and the install fails...
Things I have tried:
- Putting start /wait in front of the command (runs twice)
- Putting the command in a bat file, putting the .bat in the zip file, then running the .bat command (runs twice)
- Editing the configuration.xml to various things (runs twice)
- Copying the zip file to the machine manually, unzipping the file, then executing the command (runs once and works)
All other installs that are part of the K2000 scripted install run once and work fine.  There is some sort of an issue with running this OPPTransition.exe command on the K2000 that makes it open two command prompts that run at the same time.
What can I do to make this work on the K2000?
Asked 4 years ago 2492 views
Kace K2000 Deployment Appliance Software Deployment Scripting Systems Deployment Silent Install Commands Microsoft Office Unattended OS Deployment
0 Comments   [ + ] Show comments

Please log in to answer
Posted by: chucksteel 4 years ago

There was a bug with earlier version of the K2000 that caused post-install tasks to run twice on the first reboot. The KACEEngine.exe actually starts twice and both processes start running through the tasks. The workaround was to add a post-install task to restart the computer before any other tasks. I'm pretty sure that is causing what you are seeing.
Posted by: wimberlye 4 years ago

0
I was able to resolve this myself yesterday by forcing a reboot command followed by a wait command in between the first OS reboot and the post install tasks, so you are correct Chuck.
After the reboot and the wait any following commands ran once.
Glad to hear this is fixed in later releases.
Answer this question

Ninja since: 4 years ago