I have been experiencing a lot of inconsistencies deploying Java updates to our users.

1) The first problem is that using the same command line, I can get the 64-bit version of 7u5 to install but not the 32-bit version:

2) My second question is what is the best way to deploy Java and uninstall previous versions? I'd like to keep the list of installed programs tidied up, but also...

3) I ask this because even after the succesful deployment of the 64-bit version I can't get browsers to recognize the new version. It will, however, recognize previous versions. I've seen this affect users who show the latest version installed and yet none of their applications that require Java function properly.

I use the executable instead of the .msi because we use Dell's KACE system for deployments. If I can push the executable, it'll save me time for other things.

With that being said, I am curious if any of you have had the same experiences and have recommendations as to what I could change to improve reliability of my Java deployments.

I'm really not sure about your first problem, but I know a little about the second. I have the same problem with Java 7 not uninstalling Java 6 versions. These commands seemed to work during the initial testing phase.

These command should uninstall the Java6 Update 31-32 32/64 bit versions. No garuantees, but they might be helpful. If you need to uninstall older versions there are scripts that can be found by googling.

Your first problem is clear. The ADDLOCAL=ALL IEXPLORER=1 MOZILLA=1 JAVAUPDATE=0 REBOOT=suppress are actually parameters you need to pass to the msi instide the exe. Please change your command line to this

notice the /v"*". That passes those paramas to the embedded msi. /qn actaully is passed to the msi too. /s unpackages the msi from the exe silently.

I tried to install the full copy of the 32 bit version of Java 7 update 6 using system credentials (See  PSEXEC, http://technet.microsoft.com/en-us/sysinternals/bb897553.aspx) and received the following error:

When I later created a scripted install for the 32 bit Java I was able to install the software without issue using full Administrator credentials. The issue seem to only effected the Full version of Java 7.

You CAN actually use the MSI through Kbox.  You can either set it up as a Managed Install, or Script.  I have found that by deploying an extracted version of Java, the install SKIPS the Java Auto Update application (which can't be seen in Programs and Features on Windows, but can be seen in Kbox application inventories).  Without it, I am fairly confident that auto updating can't run regardless of what the Java control panel says.  I have tested this with Java 7 update 6 and so far have not received any update prompts.  As of Java 7 update 9, a full 64-bit executable install does not include the Java Auto Updater, so I assume Oracle hasn't gotten auto updates to work on 64-bit yet, so no need to worry there.

You can deploy 32-bit Java 7, to 32- and 64-bit Windows, suppressing auto updates, through Kbox, as follows (I have tested this with Java 7 update 9):

1.  Extract the .msi and Data1.cab files from the executable.  You can do this by beginning to run the install, then going to your user account's AppData/LocalLow/Sun/Java directory to find the extracted files.

2.  For a Managed Install:
- Zip up the two extracted files. In a new Managed Install for Java version whatever, upload the zip file to associate it with the software title.
- Install Command: Select Configure Manually, then type msiexec /i "jre1.7.0_09.msi" /qn AUTOUPDATECHECK=0 IEXPLORER=1 JAVAUPDATE=0 JU=0 MOZILLA=1
(Note: After the /i, type the name of the MSI you extracted - I'm just using the latest Java version at this time)
- Select Don't prepend msiexec.exe
- I believe all other settings are default or your preference.

For a Kbox Script:
- Run as Local System
- Upload the following as Dependencies:
- Data1.cab
- your .msi file
- a batch file with the following command in it: msiexec /i "jre1.7.0_09.msi" /qn AUTOUPDATECHECK=0 IEXPLORER=1 JAVAUPDATE=0 JU=0 MOZILLA=1
- For Task 1, under On Success:
- Directory:  $(KACE_DEPENDENCY_DIR)
- File:  nameofbatchfile.bat
- The rest of the settings are default or your preference.

This content is currently hidden from public view.
Reason: Removed by user request For more information, visit our FAQ's.
0

The above command in a K1000 distribution will work for the 32 bit version on Java 7 update 5 but you need to make sure you click the box for " Don't Prepend msiexec.exe" 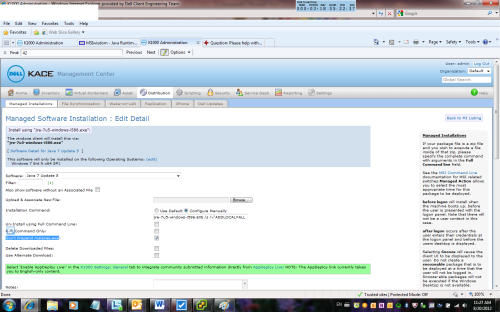