10/27/2015 5451 views
Kace K2000 Deployment Appliance KACE Product Support Software Supporting Windows
I am trying to image laptops using Windows 10 Enterprise done by KMS.
I installed Win 10, installed software with the DVD I made from the iso from VLSC, with me completely erasing the hard drive for the installation.  I changed the settings and other software, then I removed it from the domain.  Then I ran Sysprep.  Then I got the image from the laptop.  I have run the driver feed builder on these laptops with the version of Win 10 on it before, so I assume they uploaded.
I keep getting the Operating System Not Found error.
I created a Win 10 boot environment using the same iso.
This my first time actually getting an image and imaging devices outside of doing it in training with the Kace guys telling me what to do.
My pre-install tasks are:
Get Computer Name x64 (which the KACE guys helped me put in in training)
Create UEFI Partitions
Format C: as NTFS
Install Vista/2008/7/8/2012 MBR
Midlevel
Set Computer Name x64
Post Installation Tasks
Join Domain %FQDN% - again which the Kace guys helped me set up during training
K1000 Agent 6.3.314-x86
Firefox 41
The image was collected using a Win 7 x64 boot environment.  Would that make it not work?
What am I doing wrong?
Updated:  These are my tasks 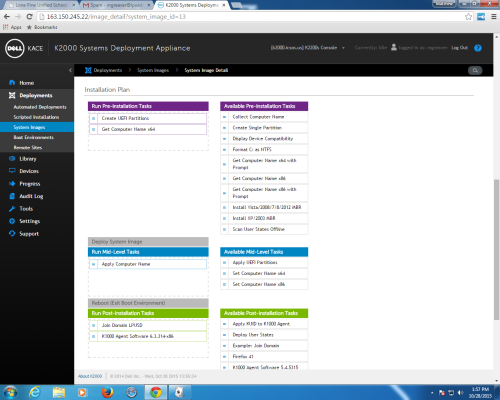 And these are the image settings: 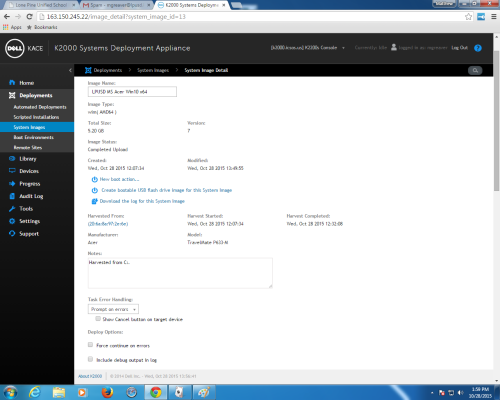 I have since looked at the Windows 10 document and believe I followed the directions correctly about making a Windows 10 boot environment by adding the drivers from Dell to the Drivers folders as done in the instructions.  I have also regathered the image from the laptop with it booting into the Windows 10 environment.
The image still stops at "Booting..." if I leave the network cable in it and allow it restart and boot to hard drive after the first imaging.  In order for it to network boot, it has to be left as a legacy hard drive, not UEFI in the BIOS.  Otherwise, the network boot is not there.  If I shut it down while it still says "Booting..." then pull the cable and let it restart to the hard drive set as legacy or UEFI, it says "Operating System not found" both ways, no matter what I do.
It still is not working.  Would it do this if sysprepped incorrectly?
More Edit:  Does the Sysprep Creator Installer have to be used on the computer that the image is collected from before it is sysprepped?  I only used the Sysprep creator to create the sysprep file.  I did not use the installer.  Does Persist Plug and Play devices have to be checked before it will work?  It is version 3.1 or 3.3, depending on where you look in the details.
2 Comments   [ + ] Show comments

Please log in to answer
0
You're mixing UEFI and Legacy pre-install tasks, you shouldn't use the "Install Vista/2008/7/8/2012 MBR" task if you're deploying a UEFI image.  Also you don't need to format the C: drive a second time, that is done using the "Create UEFI Partitions" pre-install task.
Answered 10/28/2015 by: