KACE Report on Visual Studio Installs and Who Has Them?

03/19/2017 1677 views
KACE Product Support K1000 Reporting kace reporting KACE Custom Report Report KACE Custom Reports KACE Reports customized report Microsoft Visual Studio Reporting Reports
Hi Guys,
I'm having a really hard time wrapping my head around how kace reporting is supposed to work.
All I need to do is get a list of devices and what version of Microsoft Visual Studio they have installed on them. I was hoping I could do this by the fact they are in the software catalog, and have Metering turned on, and all agents are apart of metered devices label. The specific problem with Visual Studio is if I did a label filter for begins with "Microsoft Visual Studio 20" it pulls up things the Devenv Resource, Tools for Office Runtimes, etc. but never shows up the name like Visual Studio 2015 Professional in the devices installed.
In the past I've done reports for things like Camtasia and have just set up a smart label looking at software title begins with "Camtasia" and reporting on the label. But this doesnt seem to be as easy with visual studio.
I want a way to do this through the gui and not the SQL code behind the scenes as kace reporting would be the only thing we would learn SQL for, and at this time thats too much of a time sink.
So to summarize, I need help getting a report on all instances of Microsoft Visual Studio installed on our devices showing which machines have which versions, preferably through the GUI.
Thank you for reading.
Answer Summary:

Answer Chosen by the Author

I managed to stumble on to how to do this in the GUI thankfully.

Fields to display were:

Filtering was just one entry under the software catalog portion of:

While in the end it was reasonably straight forward, the documentation around reports could be made a bit clearer. It would also be nice if simple tasks like these were a template in the gui instead of being sql based.

And just as a side note, the way visual studio is installed is quite awful, so even with this reporting we have a few people that in the past have installed say VS2013, have removed it and put on 2015, but it still shows them having 2013 as well as 2015, this is more the fault of visual studio.

Please log in to answer
1
It looks like VS installs a bunch of components and we don't know which one(s) indicate a full install. When I search for  "Visual Studio 20" in my Software inventory I get 741 results (that's individual software entries, not computers). My best guess for finding installs is to search for "Microsoft Visual Studio 20% Shell" but I don't know if that'll get any false positives. I can paste a SQL query that will search for this, if you'd like. Here is how I would do it with the wizard:
1. Set Topic as "Device" and a Subtopic of "Software"
2. Select desired Fields, Order, and Sort
3. Filter like so: 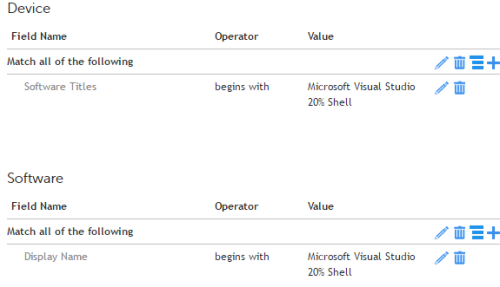