OSX Netboot across subnets via RSA

Netboot and imaging OSX from same subnet as main K200 works just fine. At a separate location trying to image a few hundred machines, and none of them netboot. I've read here on ITNinja that netboot across different subnets isn't possible, and an RSA is needed. I have an RSA already in place for Windows deployment, so I downloaded the K2000 Media Manager to my OSX machine at the remote site, and attempted to create a new netboot image directly to my RSA. It went through the whole process and errored out at the end saying permission denied. The RSA should be up-to-date, have the OSX image synced, and the main netboot image synced. I'm assuming creating a new netboot image directly to the RSA is what's needed, but it's not allowing me.

Any idea as to why it's not letting me create an RSA? I don't want to do all these sudo bless commands, since I have hundreds of iMacs to image - and supposedly an RSA should work. 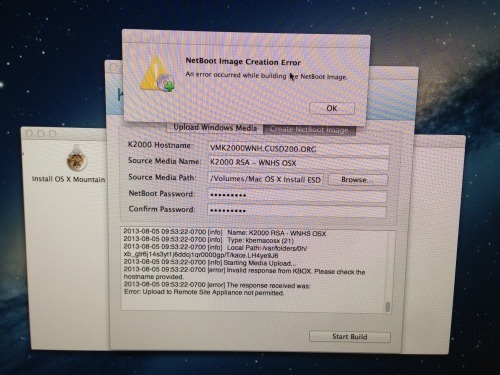 Please log in to answer
Posted by: SMal.tmcc 8 years ago

You do nothing on the RSA but deploy.  All other actions are preformed on the primary k2000 and then you sync that out to the RSA's.  You upload all mac boots and images to k2000 first, check what you want to sync and sync it.

Comments:
Posted by: sfigg 8 years ago

Figured it out with tech support help - the RSA's website has an option under network settings to enable Netboot support. So simple....yet couldn't find documentation on it anywhere :)