I would like to add a step "reboot computer" in the scripted install (preinstall tasks).
MDT and ConfigMgr have these steps build in, but can't find them in the K2000.

I know we have the ability to mark the checkbox "reboot required" for the postinstall tasks.
But this feature is lacking for the preinstall tasks.

Usage: Rebooting after enabling the TPM using the CCTK.

Please log in to answer
0
A preinstall reboot task: 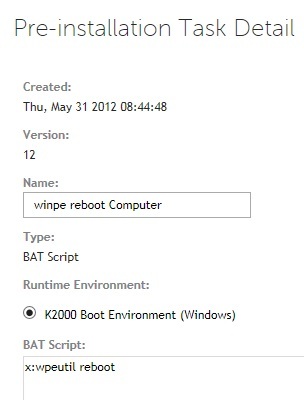 0
You will need to create 2 special kbe's using the KBEM
Here is the flow of what is going to happen.
You will pxe boot and choose the special KBE1
It loads and runs your step 1 tasks, deploys KBE2 image to the hdd and restarts.
The machine boots to the local drive loading KBE2 and carries out step 2 tasks and sets the pxe to boot first.
(since you have pxe booted these you can assign a job to be deployed upon pxe boot)
The machine reboots and deploys the assigned job.  in the assigned job use the cctk (mid level) to set hdd to first in boot order.

Create the second KBE first, then create a usb boot stick with KBE. 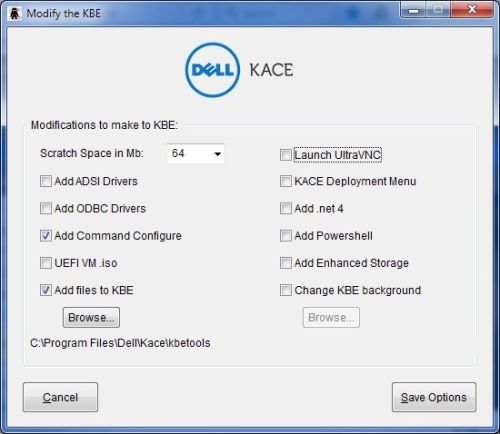 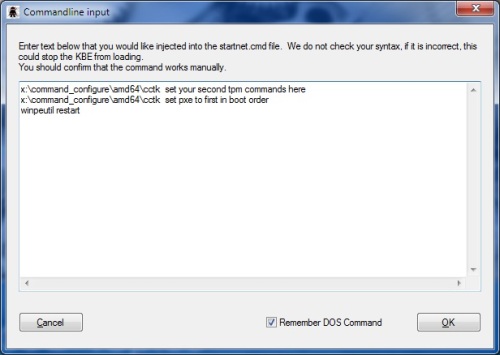 I then took a working win10 image and kbe booted like I was going to capture it.
1. Open a recovery window
2. Place the usb boot stick in this machine and figure what drive letter is assigned to it.
3. Format the c drive with the /q option
4. Xcopy the contents of the boot stick to the cdrive  (xcopy e:\*.* c: /s /y)
5. from the main menu capture the image of the drive.
6. reboot and test the HDD boot to make sure it boots into the kbe2 env. (note if you boot all the way it will issue the cctk commands and restart)

If the machine fails to boot on it own to the local hdd in step 6 you must correct this and recapture.

Now that the second kbe is captured we will create another kbe to deploy that image automatically.
For the first KBE 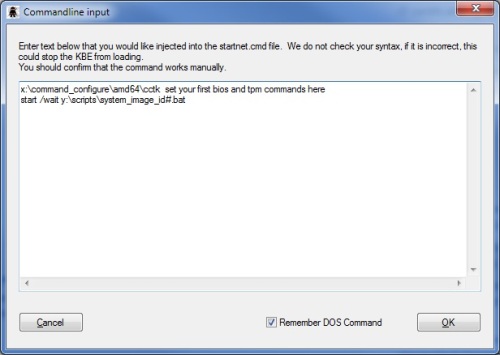 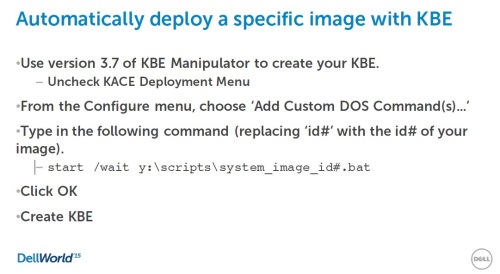 * Thanks to Corey Serrins for this information

In your second kbe image set a mid level to restart the machine.

Now that you have this in place set your image to deploy to your target on PXE.

F12 boot the machine and choose the first kbe from the menu and the rest will be hands free.